In May of 1927, a group of McAlester businessmen met and agreed to take over the charter of Bank of McAlester, a small State bank that had closed. The group opened The National Bank of McAlester on May 17, 1927 with Tom Hale as President, Roy Caldwell as Executive Vice President & Cashier, and both W. B. McAlester and W. J. Basolo as Vice Presidents. Board members were W.P. Mullen, Ben T. Childers, W.P. Freeman, and L.O. Bradford, along with the four mentioned officers.
The Hale Family represented the major shareholders until 1989. Three generations of the Hale family gave The Bank N.A. its successful legend. Elmer Hale succeeded as President in 1941 and served until his death in 1969. Elmer Hale, Jr. served as Chairman of the Board from 1969 until 1989.
Mike McGowan (current Chairman Emeritus) joined National Bank of McAlester in 1975 as President. In 1985, National Bank of McAlester became The Bank N.A. The interest was sold to the Fern Oliver Testamentary Trust in 1989, with Mike McGowan as Trustee. Mike McGowan subsequently purchased the shares out of the Fern Oliver Testamentary Trust.
The Bank N.A.’s Stillwater branch was acquired in October of 1986, when the charter of Stillwater Community Bank was declared insolvent by the FDIC. The following year, a branch in Holdenville was acquired the same way, when The Peoples State Bank was closed. In 1988, Citizens State Bank of Maud was closed and The Bank N.A. acquired it, opening its fourth location. The mission of the McAlester bank was extended to each of these branches.
In 2003, the Bank added a second facility in Stillwater, at 6th & Washington and relocated its Holdenville office, remodeling an existing building. Beginning in 2005, the interior and exterior of the main branch in McAlester was remodeled with the work completing in 2006. This was the second renovation the building had experienced, since being built in 1955.
In February of 2015, The Bank N.A. sold both the Holdenville and Maud branches, and now operates from its McAlester and Stillwater offices.
The Bank N.A.’s mission is to create sustainable long-term growth that generates high rates of return for shareholders, and security and opportunity for employees, through valuable products and services, purchased by our stable and growing customer base.
The Bank N.A. has a reputation of conservative soundness, which has served the communities well. Of equal importance is the secondary purpose, which is to encourage, promote, and support all worthy causes and undertakings, leading toward the growth and improvement of the communities in which it serves. 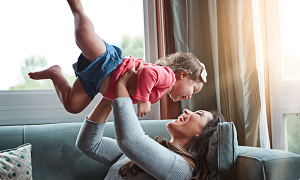 Planning with your family's interest in mind. Great things can happen.